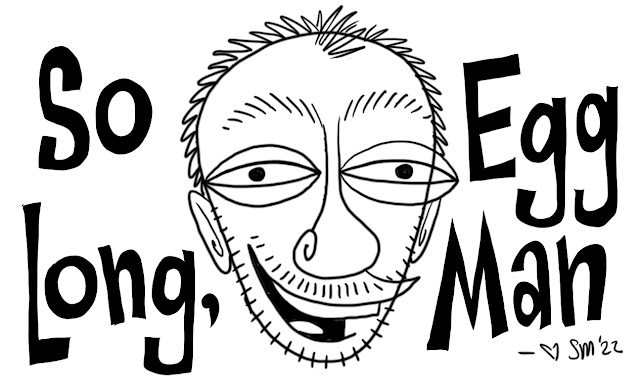 I first learned of Ralph Eggleston's death in James Baker's wonderful tribute post. I didn't know he'd been ill, so it came as quite a shock.

I first met Ralph at CalArts in 1983.  He was a 17 year-old incoming freshman.  I was a know-it-all junior with no interest in the freshmen.   However, it didn't take long for Ralph's name to get bantered about among my classmates.  Apparently, he had animated 30 seconds of full animation in his first weekend at school.  We all scoffed at this, and couldn't wait to see what kind of awfulness this kid cranked out.

In the A-113 suite of the Character Animation Department, we shared a Lyon/Lamb video recorder to shoot our pencil tests (there were two, actually, but only one of them worked at any given time).  We crammed into the small pencil test room to see Ralph's opus, like wolves waiting for raw meat.

Now we had to meet this guy!  Ralph was best described as a feral nerd - skinny, shaggy, with a wild energy that was a bit hard to be around.  He was madly passionate about animation.

Cut to 1987.  I led a small crew of mostly Americans working on "Duck Tales" in Taiwan.   Among them were CalArts alum Brian Pimental, Gregg Vanzo, Chris Wahl, Carlos Baeza, and 'The Egg Man'.

Ralph was now a feral nerd in a foreign land.  Having sushi with the crew, he scarfed plate after plate of wasabi - just wasabi- for laughs.  His face would turn red, he'd twitch, his eyes bulge and tear up.  He'd grab our water glasses, guzzling them down.  The more we laughed, the more he'd eat.  He kept this up until the waitress cut him off.  Feral.  But funny!

Cut to 1992.  I ran into Ralph in San Francisco.  I was working on "The Nightmare Before Christmas", and he was dating one of the young ladies on the crew.  His manner had changed drastically.  He was still Ralph, but calm, at ease, like he'd learned to harness that feral nerd energy, saving it for his work.

I would see him sporadically over the next 30 years - usually at Sue and Bill Kroyer's Christmas parties.  We'd exchange Christmas cards, and I just assumed that he'd grow old with the rest of the CalArts gang.  He was robbed of that privilege, and we were robbed of his creativity and humanity.   There's an old Taoist saying that surely applies here, "The candle that burns twice as bright burns half as long."