Duncan Studio is turning to Kickstarter to independently fund their interactive storybook, My Beastly ABC's.


"The iPhone/iPad app market is growing daily, and we wanted to experiment with something that would be graphic and simple as there are currently some limitations on the amount of full animation that can be accomplished.  Our intention for creating a storybook app was to make something fun and educational for kids that would deliver interactivity not achievable with the traditional book format.


We came up with the My Beastly ABCs concept to design stylized creatures from around the world, interwoven into a story of a boy who has difficulty getting to sleep because of the beasts he encounters.  The viewer is able to interact with the beasts and discover, as the boy does, that they are not to be feared. The goal is to not only encourage kids to read, but to create an enjoyable piece of entertainment with a comprehensive narrative.


We were very fortunate to get Jim Dale, world famous narrator of the Harry Potter books, on board as our story's reader/performer.  He narrates the story from the boy's point of view, an adult looking back at a time when he was young.  The entire process, so far, has been very gratifying because we were able to conceive and approve ideas with a small crew, not with a long, multi-layered approval process.


The current plan is to release the app later this summer.  We recently launched a Kickstarter campaign to raise funds to complete and market the project at the highest quality level possible.  The desire is for our studio to continue developing more original apps, with a focus on personalities and unique styles."


Visit Ken's Kickstarter page and donate if you can.


One of the best things about working at Disney MGM Studios was being able to go on all the rides for free. In the evenings after work the Park thinned out and, as employees, we could come and go as we pleased. My personal favourite was the Hollywood Tower of Terror a fantasy ride based on the old Twilight Zone TV series. I rode it endlessly and could never get enough of the butterflies-in-the-stomach final plunge.

Disney MGM Studios, RollerCoaster Rabbit and the summer of 1989 - Part 1


In the summer of 1989 I managed to get a job as an animator at the newly built Disney MGM Studio Theme Park in Florida, set up by "Who Framed Roger Rabbit" Production Manager Max Howard. Max was hired by Disney to build the new studio from scratch, and he quickly set about making a series of short "Roger Rabbit" films with his enthusiastic but fairly inexperienced crew.
Part of the Studio's production expenses were paid by the Park itself, as visitors would pay to watch the animators at work. We called it the goldfish bowl - guests would walk through the studio all day long and watch us draw. The inexperienced and the unlucky had to sit by the window - closely supervised by camera-wielding tourists.

Some of the animators claimed to be able to line up dates by gradually moving through the studio exchanging nods and winks and finally phone numbers with the girls "on the other side". For me it was heaven - my first proper animation gig since Who Framed Roger Rabbit?, a paid summer job in a sunny paradise and a chance to learn and get better at my craft.

We were led by the incredibly talented Rob Minkoff - who patiently took the trouble to fix my drawings and squeezed far better work out of me than I thought I was capable of - invariably the sign of a great director.

Lots of extremely able artists got a head start at Disney MGM Studios. I was lucky enough to work with Kevin Turcotte, Kelly Asbury, Mark Henn, Jim Beihold and Tom Bancroft, among many others who brought their huge talents to the studio.

It was a huge privilege to be there and like everyone else who passed through its doors I thought it was a tragedy that such an excellent studio was eventually closed down by Disney.

You can see the second part of this article about Disney MGM studios here, and read more about it in this classic FLIP article.


Last week, I was in Hollywood visiting friends and taking in some sights with my family.  One of our last stops was a trip north to my old alma mater, CalArts.  It had been at least twenty years since I last set foot on campus.  At the gatehouse, I showed the guard my old ID.  He laughed, said "This was three years before I was born." and opened the gate.  Asshole.

Seeing the campus was like taking a time warp from 1985 into the 21st century.  There's the original buildings, same old parking lot, same old eucalyptus trees, but it's dressed up with new stuff.  There's a funky performance hall for the music department with a small outdoor amphitheater just to the left as you drive up.

The main entrance steps are where I once met Terry Gilliam, who was screening his new movie "Brazil" at the tiny Bijou theater on the second floor.  I couldn't get in, there was such a crowd.  But Gilliam was standing out on the front steps having a smoke.  He chatted with me and a couple of other guys about his battle with Universal over the film cut. I thought my geek head would explode.   That's the kind of cool stuff that happened at that school - geek moments with great artists.

Walking through the main building, its almost exactly the same - same signs, same color coding for the different floors.  The sub-level was still covered with graffiti.  The students still had that unfed, unbathed look.

The second year Character Animation room still had sophomores in it, but no animation desks. They were working on Cintiqs atop two rows of fold out tables. It was Sunday morning, so only a few students were up and working - they had clearly been up all night.  One student was asleep on her desk.  Another student  was nice enough to listen to me yammer on about "Well in my day, we used an Oxberry!" while thinking, "I have to finish my film by Friday, please shut up, old dude."

The dorms were mostly the same.  The jacuzzi's been filled in - no doubt by the health department.  One the east side parking lot, the sprawling lawn has been replaced by ugly, pole barn style buildings with industrial metal siding.  They're small sound stages.


Driving off the lot, I thought of my old teachers: Jack Hannah, Bob McCrea, T.Hee, Hal Ambro, and Elmer Plummer, all gone now.  They worked with Walt Disney himself, and often treated us to personal anecdotes about The Man.

As I drove down Lyons Ave, to the strip mall where Vincenzo's Pizza  and Mongolian Barbecue still catered to student appetites, I thought of my classmates: Brenda Chapman,  Fred Cline, Butch Hartman, Tim Hauser, T. Dan Hofstedt, Mark Kalesniko, Dan Jeup, Kevin Lima, Rob Minkoff, Kirk Wise, and many others who have gone on to be industry leaders.  CalArts was as much a growing up experience as anything else.  I didn't fully appreciate it then, as I was too busy being a "stupid animator" as we were often called by the other departments.  We were goofy, travelled in packs, and totally immersed in character animation, 24/7.  Paradise, man!

Read more about CalArts life in this classic FLIP article!

The Faberge Big Egg Hunt is almost over - bids close on Easter Monday for your chance to own a one meter high hand painted fibreglass egg - how can you possibly resist? All the eggs have been gathered together in Covent Garden over the Easter weekend for one last push to break the world record for the world's largest-ever Easter Egg Hunt. Some of them are truly amazing - my personal favourite is "Pandora" - hand painted by the very talented wildlife painter Martin Aveling. The photo doesn't really do it justice - the surface texture has been beautifully rendered so it looks and feels like a real giant egg.

And I was thrilled to see that my egg - The Great Eggscape - is still alive after 6 weeks in the rain - apart from a few sticky handprints it was completely unscathed. One wet cloth and a gentle scrub later and it looks as good as new.
Bids close at 5pm on Monday 9th April. Go on....you know you want one! - Alex

I had my first gallery show last month and want to show off my posters.  But first, backstory.....
I live in Port Norris, in southern New Jersey, where the Maurice and Delaware Rivers meet.  A hundred years ago, it was an oysterman's paradise.  Hundreds of schooners under sail dredged enough oysters to fill 300 train cars every week during the season.  In the 1950's, a disease decimated the oyster beds.  The town was ruined.  In 1962 I was born. I would grow up watching once proud ships dissolve in the muddy banks and buildings vanish in the marsh on which they had been built.  In 1981, I got the hell out.
Fast forward to the 1990's. A woman named Meghan Wren created a non-profit called The Bayshore Discovery Project out of her love for the river.  The group purchased a 1928 schooner called the A.J. Meerwald, which they restored to its 1928 self.  They also purchased a waterfront building known as The Shipping Sheds. This is where, in the heyday, the oyster boats docked, the oysters placed in barrels, then loaded onto awaiting train cars.

After many years of slow, steady progress, and lots of volunteer effort, these sheds have at last been restored, and are now used for educational purposes as well as social events.  Last fall they began a monthly Second Friday event, where there's music, fresh shucked oysters, art, and hanging out at the docks by the river.  A very nice night out. 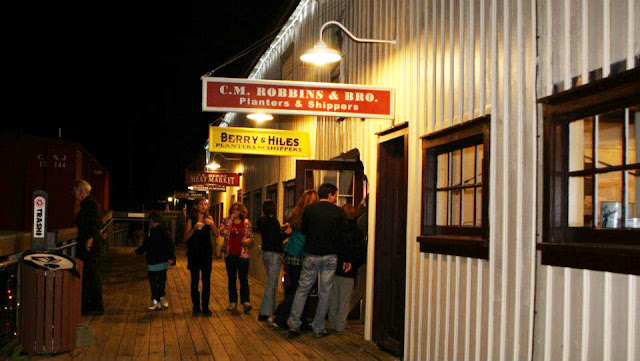 So when Meghan asked if I would design a sign for their new cafe, The Oyster Cracker,  I jumped at the chance to be part of this cool place. I used the opportunity to try different styles, playing on my Cintiq.  There were enough ideas for a poster show as part of their Second Friday event last month.  They were very well received and we sold almost a dozen prints.  Check them out, FLIP friends!

According to The Guardian, last week's UK budget will bring huge tax relief for British animators, in an effort to stop jobs and production moving overseas. Details of the new proposed tax break are a bit sketchy, and will be subject to obtaining state-aid approval from the European Commission. If all goes well, UK production of animation will qualify for a 20% or 25% break depending on the production budget. Combined with the EIS tax incentive scheme this could be a really important boost for our industry.  - Alex