Chief, Your Butt's on Fire from Steve Moore on Vimeo.

Two years ago, I finished a short film called, "Chief, Your Butt's on Fire".  I wrote about it in FLiP as my wife, Donna, submitted it to umpteen film festivals.  Thousands of dollars in entry fees later,  we had what can be only described as a flop.  Only two festivals picked it up.

Was the film that bad?

When I started working on this short, Disney still did hand drawn animated features.  By the time I finished, chipping away at it in my spare time over many years, the animation world had changed completely.   Festivals were not even accepting film anymore.

So maybe my little film was too old fashioned for today's scene.  Or maybe it just sucks.  At any rate, here it is, decide for yourself. 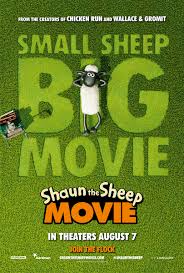 "Shaun The Sheep" is a lightweight little movie with gorgeous production design and some very nice animation; a slight plot with the main conflict based on Laurel and Hardy's A CHUMP AT OXFORD; chase scenes and crazy machines reminiscent of Buster Keaton and Harold Lloyd films, and a finale that is straight out of Chaplin's THE GOLD RUSH.

This possibly explains the otherwise inexplicable omission of dialogue on the human characters (even gibbberish would have worked, but the odd grunts and squeaks somehow seemed affected.) But I applaud their use of silent comedy influences as well as The Terminator."

One of the best things about BAFTA is its focus on regular lectures and seminars on filmmaking.

A recent event at the Picture house Central on London’s Shaftesbury Avenue featured an interview with Cinematographer Ben Davis, whose screen credits include Kick-Ass, Before I Go to Sleep and Guardians of the Galaxy. But why should an animator need to know about cinematography? Because animators are film- makers, and anything that helps you to understand the art of visual story telling will make you better at your craft. And who better to learn from than one of the UK’s best cinematographers?
Read more »
No comments: