Chief, Your Butt's on Fire

Trailer for "Chief, Your Butt's on Fire" from Steve Moore on Vimeo.

I am pleased to announce the completion of my brand new short, Chief, Your Butt's on Fire.  I decided to make it the old fashioned way, fully animating the whole thing myself, by hand, like in my student days.  The only concession to technology would be scanning the drawings, and painting and compositing digitally.  It took 13 years to do. 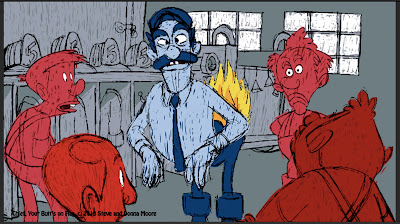 CYBoF is the story of a fire department with leadership issues.  The Chief is oblivious that his butt is on fire.  And while the crew is aware of the problem, only Fireman Roy will  speak out.  Middle management deems him a trouble maker and fires him.   I wrote the story in 1992,  based on my experience at a certain animation studio.  Over time, it has come to represent all bad management in all areas of life.

When I say it took thirteen years to complete, I don't mean that was thirteen years of dedicated work.  It was all done in spurts, with years of downtime in-between.  I did my first storyboards in 2000, then it was stored away until 2004, when I cut a story reel and re-boarded almost half of it.  I did layouts, then put it away until 2006, when I did voice recording.  I did all the voices, fulfilling a childhood dream to be Mel Blanc, if only for an afternoon.  And for music, Ward Kimball's  Firehouse Five Plus Two.  What else?

After the voices were edited and tracks read, I was at last able to start animating. I had not done hand drawn, full animation in six or seven years, and enjoyed getting back into it on my own terms.  There was no one to answer to but myself, no one to beat the joy out of a scene.  Most scenes, in fact, were done in one take, because I didn't have quick way to do pencil tests.  I had to rely on flipping my animation - real old school.

Most of the film was animated in 2007, when I had a long lull in work.  My wife, Donna, who had never done any kind of animation work, threw herself in the deep end and scanned and painted the entire film in Toon Boom on her spare time between 2008 and 2010. 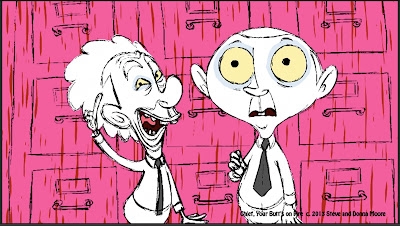 I skipped the clean up process, as it would take FOREVER, so we had to find a way to paint the rough drawings.  Donna created another layer under the roughs with areas of paint.  In an attempt to minimize the paint work, I went with very limited color separation on the characters.  The firemen were red, the chief blue and middle management was white - simple. The backgrounds are layout drawing colored the same way as the animation.

I wanted to give the paint a rough quality like the drawings, so Donna added a second layer, usually with a darker tone, that was then roughly erased, leaving residual stray paint marks.  That was a ton of work, but I'm pleased with the effect.  It's different from my other films, and I like that.

I fussed around with compositing and art direction tweeks for a couple of years.  Many hours were spent wandering lost in the Toon Boom interface before I found my way.   But when I finally got it, it was great to work with.  I had a blast experimenting with color, since I rarely get to do so in my job.

2012 was a blur, as my father's health faded, and he eventually passed away.  I spent a lot of time dealing with his needs and the film sat on ice. 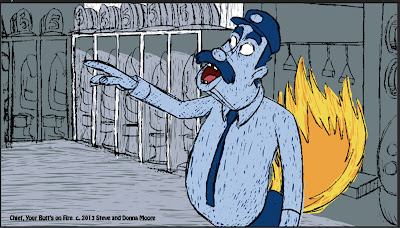 At the beginning of this year, after editing in Final Cut Pro, I was at last ready for film output.  I got really nervous.  All my other films had some post production expert onboard.  Now it was on me.  Did I do it right?

I found a film output company called Alpha Cine in Seattle.  Jean Fee walked me through the steps, and sure enough, I had output everything wrong.  I had the wrong aspect ratio and had to go through every scene in the film and re-output.  This also required layout tweaks to compensate for the wider frame.   It was like untangling last year's Christmas lights.  AND I  redid some animation that didn't pass my "forever rule".

A funny thing happened when we looked into festivals: turns out, 35mm film is passé.  This after we paid three grand for a film print!  What some prefer now is called a DCP - Digital Cinema Package (comparatively cheap - only $400 bucks!).  I feel like Walt's frozen head after defrostiing - my world has completely changed since my last short.

It feels great to be finally done with this project after such a long, drawn out production.  I would still be working on it if it weren't for Donna.  I had a lot of fun at festivals in the past with my shorts  The Indescribable Nth and Redux Riding Hood, and look forward to another go-round.  I assume partying has not gone digital too.

As a footnote to this post, CYBoF was originally written as a book project to be done with Al Holter.  Al created the book version of The Indescribable Nth on his old German printing press, and is doing the same with Chief.   A book party / film screening is on the horizon!
-Steve