And Now, A FLiP Editorial Cartoon 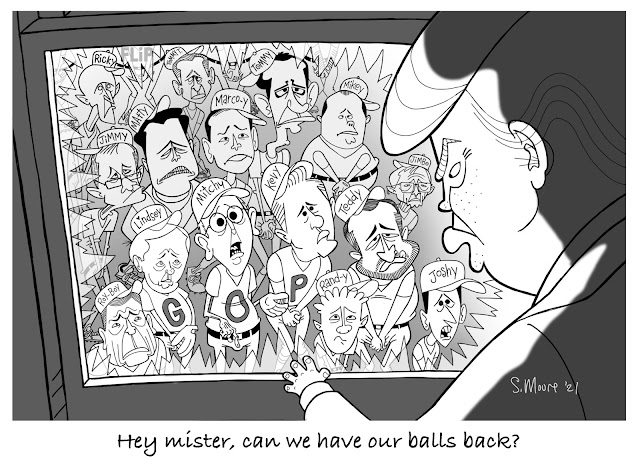 Since the election ended, I've had this idea rolling around in my head. Rolling, rolling, in perpetual motion. The only way to stop it was to let it out.  It has been a very long time since I've done caricatures, something I prided myself on back in my school days and early career.  Finding that place in my mind that interprets someone's looks into odd shapes was like finding a long lost favorite toy.

Once I finished the cartoon, of course I had to find an audience, however small.  And so I post FLiP's first ever editorial cartoon. Hopefully it makes you laugh (unless you're part of the problem, then by all means gnash your teeth in ire).

Reading that Tony Bennett has Alzheimer's Disease turned my thoughts to Long Beach, where I saw him perform one year ago today.  I had seen him twice before at the Hollywood Bowl, in 1993 and 1995.  He was getting up in age back then, so I was surprised to find he was still at it and jumped at the chance to see him for what would likely be the last time.

This was a smaller, more intimate venue than The Bowl, and once Tony stepped on stage, it was a love fest with his largely white-haired audience.  I wasn't sure what kind of show to expect.  I had seen Peggy Lee and John Lee Hooker (not together, but that would have been awesome) near the end of their lives and it was sad to watch as their skills were shot.  Would Tony still be able to sing?
Read more »
No comments: