Forty years ago this week, I took part in my first CalArts Character Animation Show.  Through the course of the school year, I had managed to fool myself into thinking I was good.  But seeing my film next to those of Dan Jeup, Chris Sanders,  Kelly Asbury, Bruce Smith, Rob Minkoff,  and a couple dozen other better skilled artists, a hard, hard reality hit me like a brick from Krazy Kat.  I sucked.

I did not make the cut for the Disney show, where all the old timers came up to watch.  At the post-show reception, I got to hob nob with Frank and Ollie, Ken Anderson, and Marc Davis.  It was a comfort to know they did not waste a minute of their shortening lives watching my mess of a film.  Marc Davis cut me to the quick anyway, because apparently, he was good for that.  You can read about it in an old post here.

While it was really cool to be taught by men who worked with Walt Disney directly, the best part of CalArts was the peer group I was lucky enough to land in.  Once I pulled my head out of my ass, I learned more from my classmates than all of my teachers combined.  We were living character animation, 24/7. Check out the program, designed by Fred Cline, below.  Many of the kids on this list went on to make big waves in the industry.   Lucky me,  I got to be the Ringo of the group. 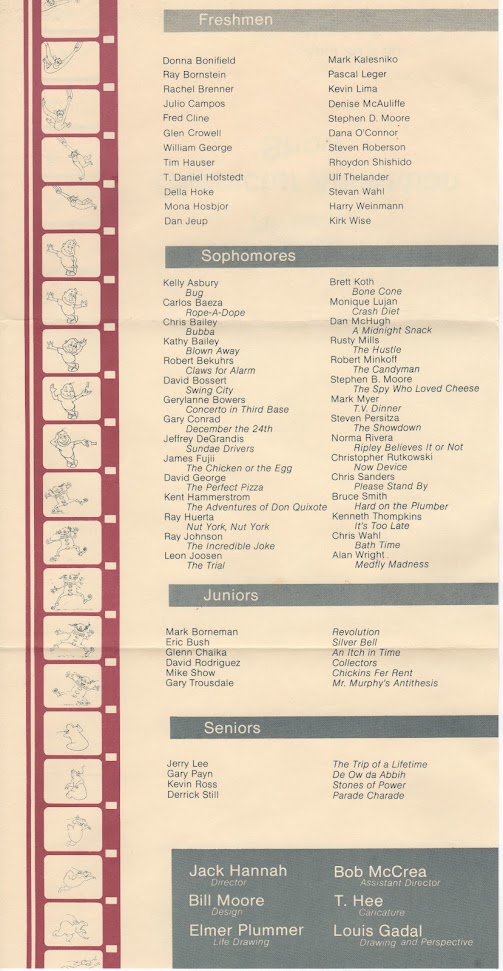