A Kick in the Pants from Marc Davis

When I first heard of Walt Disney's "Nine Old Men", seven of them were still alive.  Of those seven, I got to meet six.  And one gave me a kick in the pants: Marc Davis. 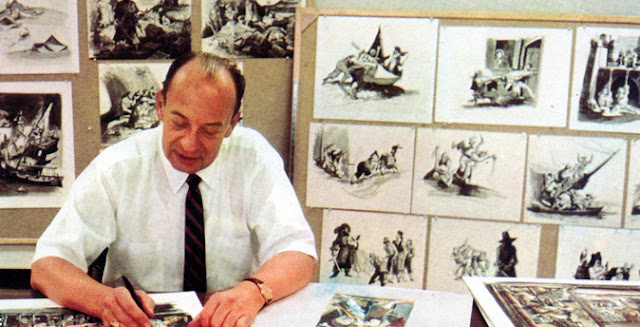 At the end of the school year, the CalArts Character Animation department would host the Disney animation gods in a screening of the best of that year's student films followed by a reception where they could mingle with students.

I arrived at CalArts having never heard of the Nine Old Men.  But after eight months of intense indoctrination on all things Disney by classmates Dan Jeup and Tim Hauser,  I was bursting to have my film be part of The Show, and figured that since I had learned so much and cared so much, I was a shoo-in.  So when that didn't happen, I was left mortified and searching for answers / excuses.

At the Disney Show reception, I sheepishly mingled, talking to Frank and Ollie, Woolie Reitherman, and Ken Anderson, or rather, listening to them talk. After getting over initial shyness, I found they were all quite approachable and liked talking about animation and the good old days.  But it was Marc Davis who asked about my film.  When I told him it didn't make the cut, he said, "Why not?"

Cornered and embarrassed, I tried deflecting the blame. "I dunno. I guess they didn't like it."

And in the most casual, friendly tone, Marc said, "Maybe you don't draw good enough."

I could feel myself cross-dissolving into a cartoon jackass after being led off a cliff.  Marc Davis just told me I suck in the kindest way.  Then he asked, "How is your drawing?"

I came clean.  Yes, my drawing skills were pretty weak.   I had spent the whole school year working around that fact, convincing myself that you don't have to be a good draftsman to be a good animator.  But here was Marc Davis, the man who animated Cruella DeVille and designed the Pirates of the Caribbean ride at Disneyland, standing before me saying I should work on my drawing skills.

Our whole conversation lasted no more than three minutes, but it propelled me through the next three years of school and beyond. Marc Davis forced me to face the facts: I had wasted too much time and had a lot of ground to gain to compete with my classmates in the professional ranks.  I had never taken drawing seriously before, but thanks to Marc, I now had a goal to fill one sketchbook a month with nothing but life drawing.  I called it "A year of work and worry."  Thirty-one years later, his words are still audible in my head, pushing me to improve.

Today would have been Marc Davis' 100th birthday.  I never got to thank him for the kick in the pants.