At last - A Graphic Novel about the Hunched and Goofy

Mark Kalesniko’s graphic novel Freeway is a truly brilliant, hilarious look at the hunched and goofy lifestyle in our industry's ground zero.  His humor is wickedly honest, his storytelling unflinching.  His graphics capture the blinding stark light of Los Angeles with a pace that pulls the reader through at a wicked pace.  Freeway should resonate with anyone who has worked in the LA animation scene and experienced this less-than glamorous life in the San Fernando Valley. 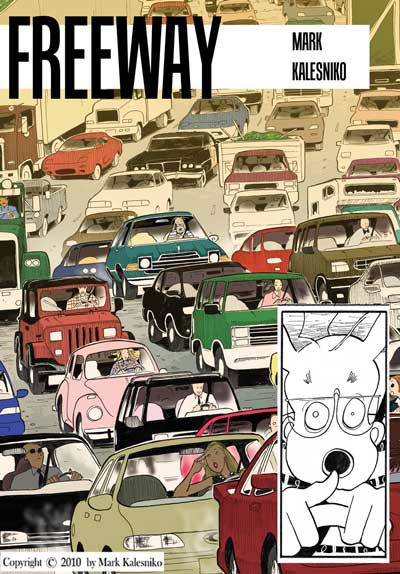 Freeway tells the story about Alex Kalienka, a layout man, stuck in traffic on the 134/101freeway as he heads to work. While trying to keep calm and get to his destination, his mind bounces from one thought to another exploring his life, fantasies and fears. These thoughts show Alex imagining a golden age of animation in the 1940’s where great artists work in creative collaboration and mutual respect while contrasting with the present day reality where office politics, petty jealousies and boredom are the norm. It is this contrast of the romanticized past with the realistic present that sets a conflict that Alex tries to resolve as he drives to work. The theme, as with my other books, is what you perceive or imagine something or someone to be is for the most part the complete opposite in reality.

As with my past works, I do incorporate some autobiographical elements in my stories. Like many writers, I write what I know, or better yet, imagine what I know. The beauty of writing fiction is combining my experiences, experiences of others, and imagination to create a story that is satisfying to the reader. For instance, in the 1970’s part of the story - where Alex comes down to L.A. - that experience really happened to me. I did come down to try to break into the animation business and was so overwhelmed that I hid in my hotel room and ran home. But that is where I end the autobiographical element and bring in the fictional part of the story.  Alex is pretty much by himself at the hotel, so I added the religious character of Walter so he could have someone to tell his story to.  That never happened in reality. The same with the mystery girl, there was no girl breaking into hotel rooms when I was there, so I added her for drama and a little sexual tension. That’s what makes writing fiction fun, combining different elements to make for an interesting story.

The characters in Freeway are composites of people that I have known both in and out of the animation business. On one project I was working on, there was a rumor of a cleaning lady spotting someone running around naked after hours. I never heard if the nudist was seen again or who it was, but the image stuck in my head. Years later, when I was writing Freeway, I thought why not make Paul the nudist, as his way of venting his stress and frustration. Again I knew no such person but it made a great way to add a fun personality trait for one of my characters. 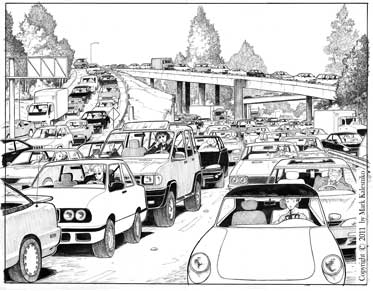 Freeway, as with all my books, starts with index cards. I write down scenes, plot points, and dialog on the cards and tack them on a board. Because Freeway has a very complicated storyline, set not only on a freeway but also in 3 different time periods, I put each time period on a different color card.  For example, the freeway sequence would be white, the 70’s sequence pink and so forth. After I had all the ideas down, I began to shuffle the cards into a coherent story using the colors to help me keep track of which story was coming up next.

Once I felt I had a full outline, I began to write the script using the index cards as my template. The script was made up of seven chapters, all titles of songs from the 1940’s. Each chapter had a certain theme.  For instance, in Chapter 3, “If You Were The Only Girl In The World,” I wanted to explore the women in Alex’s life including his girlfriend Chloe, and his obsession with the mystery girl on the freeway. 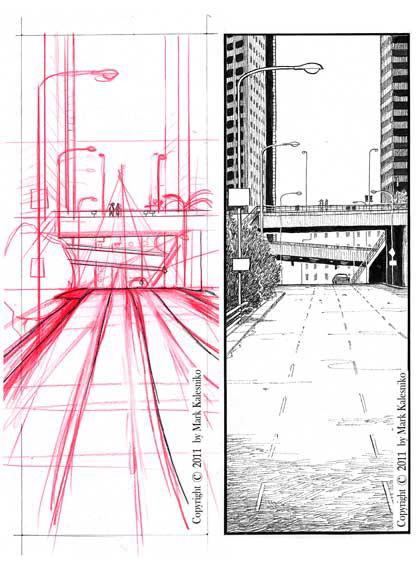 Once the script was completed, I would take each chapter and break it down, drawing tiny crude thumbnail sketches of each page and its panel placement, action, and dialog. From there I began the drawing process. On past books, I would draw right on the board, but because Freeway had so many characters, time periods, and cars, it was easier to draw roughs separately on scratch paper and trace them to the board. Once drawn, I would ink the page and it would be complete and then I would send it to my publisher who would do the lettering and balloons. If you want to see some of the rough sketches, thumbnails and photos used in my book, go to my blog at www.markkalesniko.blogspot.com/ .

Freeway took ten years to create.  My previous works took on average of three to four years, and I thought Freeway would be the same. What I didn’t take into account was the amount of research that was involved including the re-creation of the 1940’s Bunker Hill district - which does not exist anymore - or the complexity of drawing thousands of cars, which are extremely difficult to draw. Also, I wanted the book to be pleasing visually and to do that I had to render each drawing quite extensively which was very time consuming.  My hope was that when completed, the reader will be able to go on a visual trip that they can go back to time and time again. 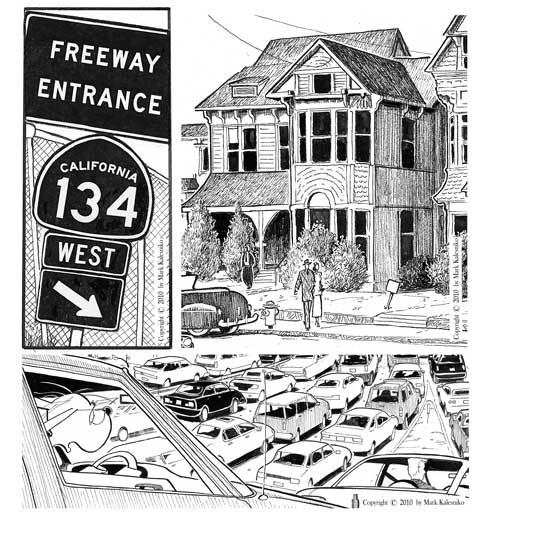 The marketing is mostly done by my publisher. They send out my book for review and set me up for signings or talks at Comic Con, Ape and Miami Book Festival. I’ve also set up a web presence with my website, blog and Facebook to help promote the book.

At the moment, I’m finishing up a 38 page, Alex story that I will be giving away on my publisher’s website.  That should be done in a couple more months. After that, I have a couple of ideas for longer stories which I will do some outlines on and then choose which one to do next.

I want to thank Steve Moore for setting up this arrticle. Steve and I go way back to our days as animation students at Cal Arts and his support and interest in Freeway is greatly appreciated. 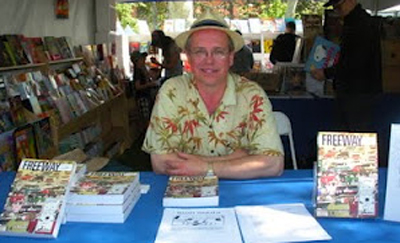