Speaking of What Worms Leave Behind...

I can think of no better way to personally commemorate the end of Donald Trump's presidency than to write about worms and their poo.  Last summer, I sought to buy a composter for my vegetable garden.  While looking online, I discovered worm composting.

After much browsing, I bought a 'worm hotel' - a series of stackable tray bins with mesh bottoms which I furnished NOT with casting couches, but with garbage and shredded paper.  One hundred hotel guests arrived by mail in a sack from Uncle Jim's Worm Farm in Pennsylvania.   I made a little sign, "The Wiggle Inn", and waited for compost to happen. 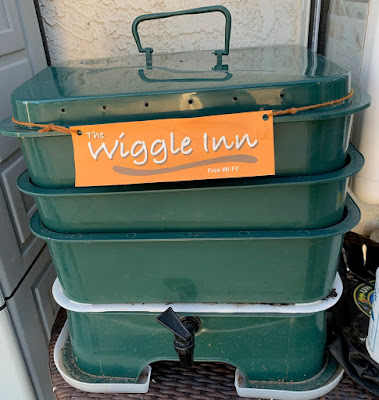 You start with one tray of garbage mixed with shredded paper and a bit of moist soil.   While the worms party down in garbage town, new garbage is placed on a second tray stacked above.  When the party is over in tray one, the worms commute through tray two's mesh bottom, leaving tray one full of glorious compost.  This process continues on to subsequent trays up the stack.  Impressed by my purchase, I thought, "What a unique little hobby this will be."

A week later, the worms were dead.  Either I had done something terribly wrong or I had purchased a sack of doomsday cult worms (No, I did not test the soil for Kool-Ade).  Most likely, the summer heatwave did them in.  Without air conditioning, The Wiggle Inn was a deathtrap.  For the next three months, I continued feeding garbage into the vacant hotel to rot on its own accord.  A sadness hung about its trays as the ghosts of 100 red wigglers wrought my kitchen throwaways.

In early December, I sprung for another sack of worms.  This time, Uncle Jim, make it two hundred!  A Christmas present to myself, I set them loose on the lower trays, where the garbage had broken down the most.  Not only did the worms survive, but a month later, I harvested a bucketful of the richest, blackest compost a garden could hope to have.   The Wiggle Inn is now a happy, thriving worm community, safe from the curious finches who perch upon its roof. 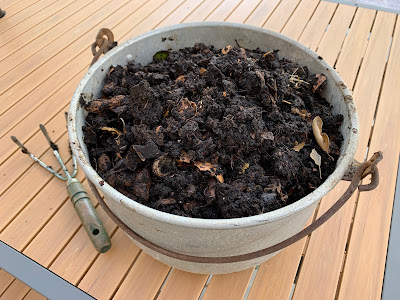 Email ThisBlogThis!Share to TwitterShare to FacebookShare to Pinterest
Labels: lifestyles