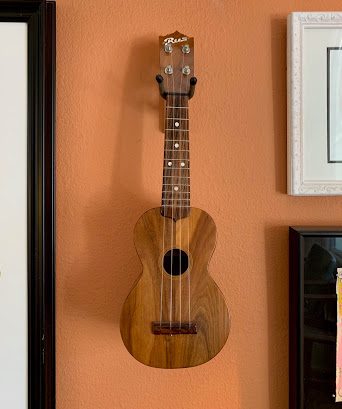 Last night there was a story on the local news about Harold Rees, a luthier (maker of stringed instruments) who was still at it at the age of 100.  For years, concert violinists have purchased his work, or entrusted him to repair and restore their precious instruments.  It was a really wonderful story made more wonderful by the fact that I know this man.

Harold Rees is the father of my longtime friend and animation colleague Jerry Rees.  Over the past 35 years, I have seen Mr. Rees at Jerry's house on many occasions.  I've also seen many of his handmade instruments - violins, violas, banjos, and ukuleles.   After one such visit to Jerry's with my wife Donna,  she commented on the incredible craftsmanship in Mr Rees' work.  I confessed to her that I had always wanted to buy one of his ukuleles but was afraid to ask. 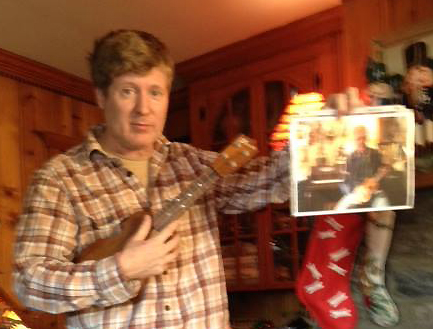 So guess what I got the following Christmas, 2013?  Donna had discreetly contacted Jerry's wife Rebecca and some kind of deal was made.  I was completely floored, and proudly displayed the ukulele in our living room, sharing the story with anyone who would comment on it - and they would.

Cut to fall of 2016.  Donna had passed away two years prior and I was about to relocate from New Jersey back to California.  I shed more than half of my possessions - including the animation desk I had owned for 33 years - to fit into a 27 foot long U-Haul.    Once unloaded in California, it took months to unpack everything.   As the number of boxes dwindled, I realized that my Rees ukulele was missing (insert anxiety spike here).

I looked through the remaining packed boxes.  No ukulele.  I looked again and again.  No ukulele.  It made me nauseous to think I had managed to lose this special handmade gift from my late wife on our last Christmas together.  I confessed to Jerry and Rebecca.  They did not tell Mr Rees about it. 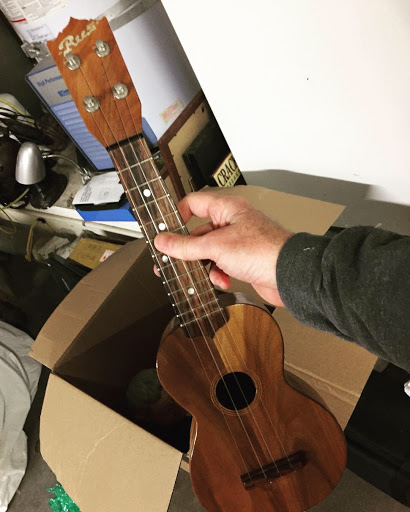 A wave of emotion hit me.  My knees buckled.  I laughed that crazy laugh like when you've had a near death experience.  Close to tears, I took the above picture and texted Jerry and Rebecca.  What a freaking relief! 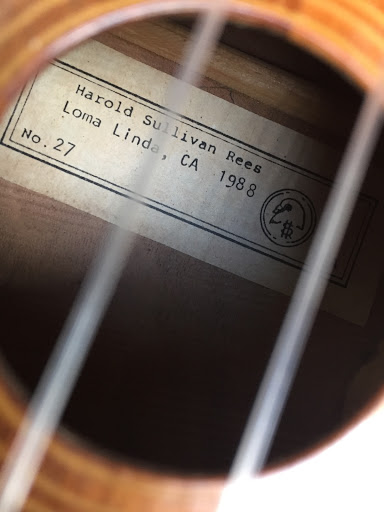 The Rees ukulele is now on display on a wall of art in my living room.  I play it with an extra level of appreciation.   The story having a happy ending, Jerry finally shared it with Mr Rees, who had a laugh about it.  Whew!

Moral of this story - keep your friends close and your ukuleles closer!