Writer’s Block - the birth, life and death of a newspaper cartoon strip

Back in 2005 I briefly had two cartoon strips running in The Times. As well as Queen’s Counsel (published in the law pages since 1993) I successfully pitched one for the Saturday books section. It was titled Writer’s Block, and was a gentle satire on the literary world which I dreamed up with a writer friend in Los Angeles, the very talented Erica Rothschild.

The strip was about a novelist, Ben, and his long-suffering agent, Maxine. Ben faced the endless rejection of his manuscripts and Maxine spent her days cruelly squashing the hopes and dreams of her aspiring writers. Putting up with Ben’s creative angst was his long-suffering girlfriend Rachel, ever playing second fiddle to his long-awaited novel. 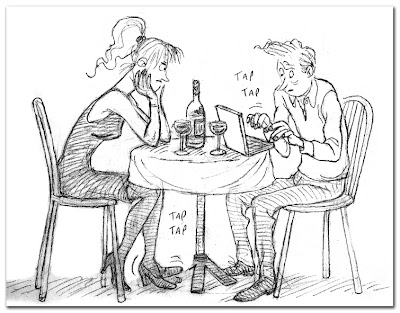 We had tons of fun writing it. Erica was (and is) a successful screenwriter, which is to say someone who faces the endless humiliation of a Hollywood studio commissioning, paying for and then gutting or re-writing her work. She poured her own frustration into the cartoon ideas, which lent the strip an authenticity I could never have given it alone.

The strip only lasted a year. The Times never said why they wanted to cut it but I presume someone important must have ordered its demise. At the very least, in an era of cost-cutting, they didn't like it enough to keep paying for it.

And maybe we never quite found the right voice. Both Erica and I were living in Los Angeles (Erica still does), and we were trying to write it as if we were based in London, a surprisingly hard trick to pull off, even for me, who grew up there.

Looking back on it now, I still like the jokes. Part of the fun of writing a strip is you get wrapped up in the characters; they start to feel like your children. And who knows? Maybe we'll find another home for it...one day.