Apparently the server which hosts the site, which is based "somewhere in the North of England", has experienced what is called a Distributed Denial of Service Attack, known to tech heads as a "DDoS".

This is how Matt explained a DDoS to me:
"Basically someone, or something has targeted an unimaginable amount of traffic at the server and it just can't take it, so, the server is up, but most of the time it is so slow you can't access it. Why someone/something has done this I do not know.  Malicious? Possibly.  Could be me targeted, could be targeted at any one of my clients - the perpetrator would see the IP of the web address he was angry with and then target all domains on that IP, from domain level.  So it's almost impossible to stop, the only thing you can do is try to manage it. This is what we did last night, about 12:30 am it started working, great, got a good nights sleep, but alas..."

According to Wikipedia, a Distributed Denial of Service Attack looks like this: 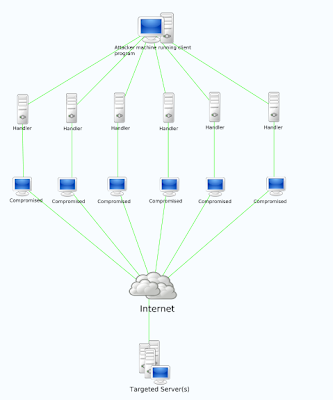 Basically, it's tons of computers all firing endless emails at a single site, typically requests for information, with a view to overloading the servers so massively that they crash, rendering the website unresponsive. This is the stuff you read about in the news, cyber attacks on giant corporations, not the sort of thing that is supposed to happen to small online animation schools.

And who would do something like this? What kind of nutjob sits at home trying to bring down websites? Someone who clearly has a lot of time on their hands.

Fortunately, there are various workarounds available while we fix the problem. Files can be emailed, videos can be sent via ftp. Life will go on. But who or what would go to such lengths to bring down our server is a total mystery.