FLIP: Tell us a little about your new book on Maurice Noble. What is it called and when will it be published?

Tod: The book is called “The Noble Approach: Maurice Noble and the Zen of Animation Design.” It will be on bookshelves from 31 May 2013, printed by Chronicle Books of San Francisco. The book discusses Maurice's career and life but, more importantly, it talks about his approach to animation design and the philosophy behind it; The Noble Approach.


FLIP: What is it about Maurice's work that inspired you to do this project?

Tod: It was always strange to me that there are a number of good books about mid-century animation design. Designers such as Mary Blair, Eyvind Earle, and the crew at UPA have gotten a lot of attention in print. Yet there has been very little written about Maurice… who I think was more influential than most of his peers. What is unique about Maurice’s book is he didn’t want to make a coffee table book full of his art, he wanted a book full of ideas that designers could easily apply to their own work.

FLIP: What was the genesis of this project? Were you approached or was this your idea?

Tod: “The Noble Approach” was Maurice’s idea. He had been preparing his notes about design for some years before I knew him. After Maurice began training a group of us at Chuck Jones Film Productions in 1993, he realized that we had yet to learn many of the design basics he took for granted. More importantly we really didn’t understand the rudimentary process of film design. So along with technique, he emphasized his design process in our training. The last few years of his life Maurice’s eyesight began to fail, and he started dictating many of his ideas about color, pan speeds and such to me, which I would write down for him. Just before he died Maurice asked me to help finish his book if anything were to happen to him. Thirteen years after his passing, his dream is finally coming true thanks to a lot of help from a lot of very talented people.


FLIP: How large an undertaking was it?

Tod: This book is easily the most difficult task I’ve ever undertaken. It’s far easier to practice animation design than to write about it. The first draft of the book was over 400 pages. The publisher asked me to condense the same information into less than 200 pages. I worked with a great editor, and I think we were successful in keeping the essence of Maurice’s intention.

FLIP: How difficult has it been to secure the rights to Maurice's work?

Tod: Maurice’s original vision for the book was to use images from his personal collection to illustrate his design philosophies. Unfortunately, things got complicated after Maurice’s death and Warner Bros. purchased his collection from the Noble estate in 2004. I’ve been discussing image rights with Warner Bros. since then. Unknown to me Warner Bros. was pitching their own Maurice book to Chronicle at the same time I was. The publisher went with the “Noble Approach,” which complicated things a bit with Warners. Disney on the other hand was really easy to talk to. They asked me “what images I needed… and when?”


FLIP: What is your favourite project that Maurice contributed to?

Tod: That’s a really difficult question. Maurice was involved in so many interesting projects. Dumbo and Bambi are probably my favorite feature projects that he was involved with. From his Warner years, Feline Frame-Up,  A to Z-z-z-z, and Boyhood Daze all have design elements I love, along with the various unusual space pictures he designed. And of course, What’s Opera, Doc?. The Dot and the Line, which won the Oscar in 1965, was probably Maurice’s most personal statement of his commercial work. Though he was credited as co-director with Chuck Jones, it was really Maurice’s picture.
﻿﻿

FLIP: You also work on film and TV projects as a designer and director. How do you balance film and books?

Tod: Luckily I have a very understanding spouse who appreciated the importance of making money on commercial projects… and the value of maintaining an identity as an independent artist. We try to alternate paid projects with something more personal such as Maurice’s book, and our short films. Now that Maurice’s book is done I will spend a year or two working and saving for our next endeavor.

FLIP: You contacted a lot of artists working in the industry to share their memories of Maurice. What kind of response did you get?

Tod: Honestly I expected feedback from only a small percentage of the people I contacted. But the response to this project has been overwhelming! It has been really moving to see how many lives Maurice has touched over the years. Not only with his art, but with the way he shared his knowledge and humor. Unfortunately we were only able to include a small amount of all this amazing material in the book, but we hope to post a lot of it early next year on a Maurice Noble blog/website. 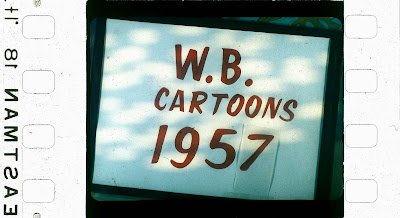 FLIP: What advice would you offer to anyone aspiring to be a designer for animated films?

Tod: Maurice used to tell us something his mother taught him; “The greatest asset an artist can have is a curious mind, and the courage to explore it.” So many aspiring film designers spend too much time looking at cartoons, and animation art. While there is a ton of great stuff out there… It’s difficult to make something original if you have the same influences as everyone around you. Be curious about life, travel, visit museums, and live in a culture outside your own. Eventually you will find your own voice, and when you do, don’t be afraid to express it just because it’s a little different than what’s out there. 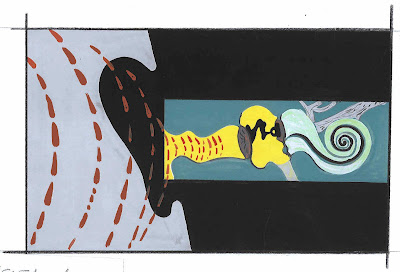 FLIP: Sold! Where and when can we buy your book?

Tod: It is available for pre-order now on Amazon under “The Noble Approach” and will be available everywhere on May 31st of 2013.