The Grinch Who Left an Easter Egg 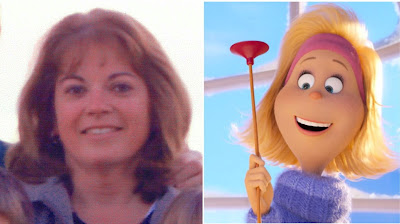 In May of 2014, my wife Donna was a patient at Sloan Kettering Hospital in Manhattan, being treated for complications from the cancer she'd been fighting for 3 1/2 years.  The doctors were treating her aggressively.  They were the best in the country, so we were confident she would beat it.  As she rested, I sat next to her bed with my Cintiq, doing storyboards for Illumination on "The Grinch".

I was working on May 15, when the the entire medical team came in and announced they were ending treatment.  Game over.  16 hours later, Donna died in my arms.

To say a lot has happened since then would be an understatement.  I moved back to California, starting life over.  "The Grinch" went through a total rewrite and new director.  None of my work is in the final film. But there is one thing, something for which I am most grateful.  Cindy Lou Who's mother was named Donna, in her honor - a very special Easter Egg courtesy of Chris Meledandri.  He's no Grinch!