Bringing some Christmas spirit to FLiP, veteran storyboard artist Amber Tornquist Hollinger shares the adventures of Stewie the Elf, her whimsical creative spin on the Elf on the Shelf  phenomenon.

Stewie, being an Elf on the Shelf, has a whole book to explain his genesis upon arrival to one's home. As it has been told to me, each Elf arrives at each home in his own manner. Last year, right before Christmastime, the family was sitting down eating what could only be described as an out-of-this-world home cooked meal by Mommy.  We heard a knock on our front door.  When answered, we discovered only a gift bag with no note attached. Inside, it turned out, was said Elf.  We sat down in surprise and read the origin-book he had with him, and discovered we needed to name him for him to become part of our family. He was to watch over us and report back to Santa each night.  The children-- stoked as shit. 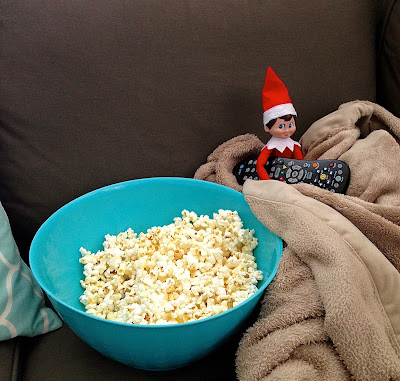 At first, I think Stewie was just getting to know our house.  He would turn up in fairly ordinary places in the morning after he'd been exploring - in a stocking, or next to the kid's computer.  After a week or so, my middle son Josh came home and asked me if Stewie had gotten into any mischief while he'd been away at school.  And no, he really hadn't.

Unbeknownst to me, Stewie was on his shelf, listening.  I suppose some ideas began churning in his head, because the next day we woke to find him zip-lining across our living room. Each day since, he seems to be up to something that will, at the very least, leave a stain.

My kids think Stewie is badass, of course. He has a mind of his own-- you'll have to follow him to Santa's house for his secrets. I think his goal is to have as much sugary fun while he can.  He has 24 days with us before he has to get back to the North Pole and help Santa. Think movies: Road Trip, Going Greek, and Animal House... but with half the swearing and twice the plot.

When polling the children, I found a few scenarios that overlapped their favor...

1- the living room zip-line morning (no picture for this)

2- the recent trip to Starbucks in the family car morning 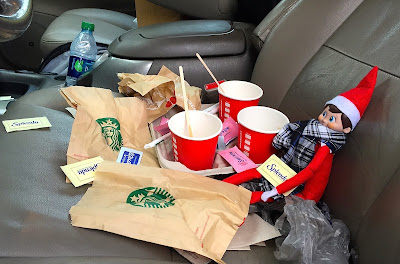 3- the morning-after-eating-a-whole-bag-of-christmas-M&Ms-and-pooping-them-out morning   (with mommy being an animation film geek, there was bound to be a butt gag) 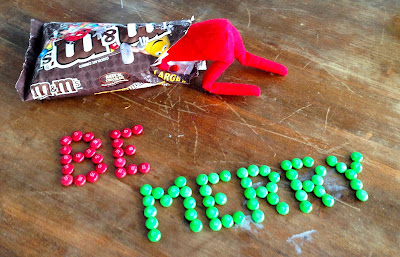 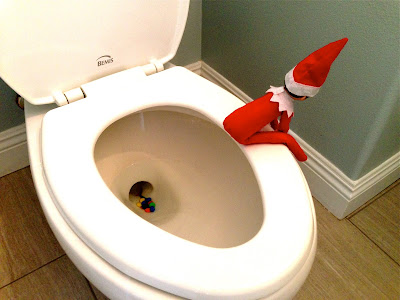 Stewie and I have been become quite close over these Christmas seasons, and I'm kind of partial to character revealing moments.  He was totally in on the joke when he photo-bombed the Rice Krispy box in the cupboard (no doubt those 3 wanna-be cereal elves are the endless butt of jokes at the North Pole. Good one, Stewie).  And I liked when he set up a photo shoot with some of the girls' Barbies-- complete with backdrop and cheesy holiday props.  That was extra clever of him because it was totally premeditated: the night he returned to Santa for the year, he left his own Christmas card to the kids, using the picture from the photoshoot. He's got a pretty good sense of humor, that Elf.

Listen, everyday at our house is like Groundhog's Day.  It's like the first time they've ever gotten dressed, eaten with a fork, or buckle the seatbelt when we get in the car,  leaving me to wonder if at any moment my spawn will fall victim to natural selection.  The Elf throws some variety in that routine.  Oh,  and they also smile and giggle and gasp and chatter with such a purely innocent joy, that I forget about those heavy bags under my peepers. (at least until they forget their jackets). 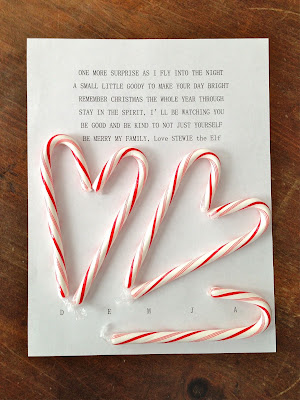