Richard Morgan has authored and Illustrated heaps of childrens' books in the UK, such as his latest series Thorfinn the Nicest Viking.  I met him in New Zealand working on my Redux Riding Hood short, and we've been long distance pals ever since.  He shares with FLiP his plans of bicycling to raise money for cancer research.

My daughter and I have started cycling together during the lockdown and felt we wanted a goal, so we joined the Cancer Research UK Cycle 300.  I lost my Mum and my wife's Gran to cancer, plus I have lost several close friends to this disease and seen the horrible upset it leaves in its wake. However, I have also seen close friends fight and beat cancer due to the amazing treatment available now.

Living in Cambridge, its all road bike for us.  We've been building momentum since the Tour De France came to visit.  I have always cycled its like second nature. I got my first bike from Ellis Briggs in Shipley, Yorkshire, and rode it everywhere.  As I learnt to drive I got a mountain bike and took it to the lakes in Cumbria to hoon down mountains. When I moved to Auckland NZ to work for Disney*, I treated myself to a new Marin and cycled all over, it was amazing.  So at 53, this seems like a wonderful thing to be doing with my daughter before she goes off to university in September, hopefully!

The cycle is over the whole of September and my daughter is keen to do it as lots of short rides and avoid the pain in the bum.  I would rather do one or even two bigger rides for the adventure, so we will see who wins.   I will be updating the charity page as we do the rides so you can see us on the road and follow our progress. 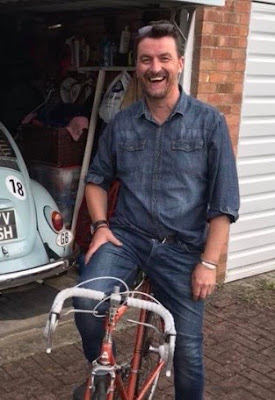 People can donate on my Just Giving page.