Welsh filmmaker (and friend of FLiP) Nathan Erasmus has teamed up with young psychedelic rockers KOYO to produce a new sci-fi inspired animated video for the band’s new single ‘Jettisoned’. 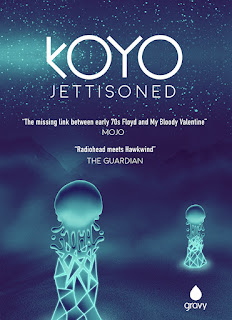 The band, who played at the recent Download Festival at Donnington Park, and will play at Sheffield's Tramlines Festival in July,  are described as “Radiohead meets Hawkwind” (The Guardian) and “the missing link between early 70s Floyd and My Bloody Valentine” (MOJO).

The band have their own unique experimental sound, inspiring the video about a space cowboy, who is sent to a far away planet to exterminate a weapon of mass destruction; when he gets there he finds nothing, and instead throws the whole eco-system into chaos.

The band liked the direction of combining rotoscoped images of them performing on stage, intertwined with a hand drawn character narrative - and then the fun started. Erasmus worked with his long time collaborator Kaolu Aoyagi to help design more characters for the world, and digitally redraw the story board for the animatic which was then synced with the music.

The rotoscope scenes were made in After Effects using existing gig footage of the band and the character animation was hand drawn then all comped together in Premiere.

To see more about the band, including tour dates, follow this link.