Last May, I was having lunch in the new courtyard at Nickelodeon (where I work) with writer Andrew Blanchette.  There were some guys sandblasting cartoon characters into the concrete benches. Working in the midst of them was a model-pretty woman - not the type you would cast in a blue-collar role, unless it was a "Flashdance" remake.   I told Andrew. "We need to go talk to her."
And so we met Tara Tarrant, owner of LaJolla Stone Etching. She was putting the finishing touches on a very impressive Ninja Turtles etching that wrapped around a bench. So how does a gal like her find herself sandblasting for a living?
Tara gave FLiP the scoop:

"I come from a long line of artistically gifted individuals, mainly on my mothers side. My grandmother and mother are amazing oil painters and my mother is a muralist as well. I believe I must have picked up any artistic talent that I possess from these amazing and talented women. I do not have any formal art schooling, but I have always loved art and being creative.  It's in the blood!"

"I started working at 19 for a friend's mom who had a small sandblasting business, engraving words on river rock and glass. I learned the trade from a very talented lady who inspired me to continue in the world of artistic sandblasting. Years later I got my own equipment, just for fun mainly. As people would receive my stones, others would order.  I became a custom-based business, but as the years continued, I started picking up more in the on-site sandblasting work and started working with contractors, architects, and designers on commercial projects as well. It seemed to actually just manifested into its self by sheer love of the trade."
I was contacted by a general contractor regarding the Nickelodeon project, who hired me to do a few mock-ups of Danny Phantom. They really liked the work and said I was exactly what they were looking for.  We are located in San Diego, but being a niche line of work, travel is a big part of the job.   Nickelodeon was one of the coolest and most creative jobs we have done thus far. It's always inspiring just being in the same energy field as so many creative people. I was so honored to be chosen for this special project."

So how does this work?

"The basic process would be initially designing whatever it is that's going to be engraved. Then we decide what type of medium we are going to use for the application. We create a template and adhere it to the stone or whatever type of material we are going to blast. We then blast via sandblasting (pressurized air and sand mixture). Once it's blasted we paint it and it's ready for installation or placement."

Now here's where this post takes a turn.  As Tara explained the process to us on that day last May,  I had an "Aha!" moment.  I may have actually said "Aha!" aloud, in fact.  I had been wanting to create a memorial stone for the grave of my late wife Donna, and here was the answer.  Strangely, it had been exactly three years since her funeral, so I guess it was on my mind.  At any rate, when circumstances align like this, I get inspired.  I knew Tara was the one make Donna's stone.

I spent the next month working on a design in my free time.  I sent roughs to her for feedback, and ultimately went with this: 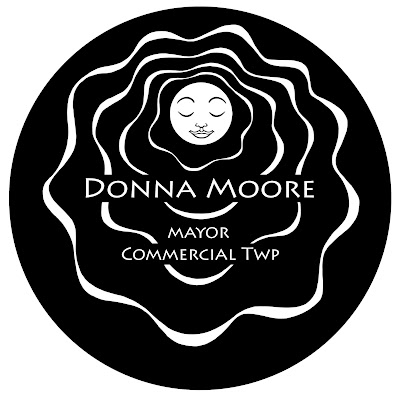 The moon face was based on a necklace Donna wore to chemotherapy treatments. She found it calming.  The ripples represent the impact she made on the lives of so many and to the community as a whole (she was mayor of Commercial Township in New Jersey).   Tara gave the design the thumbs up and went about doing her magic. 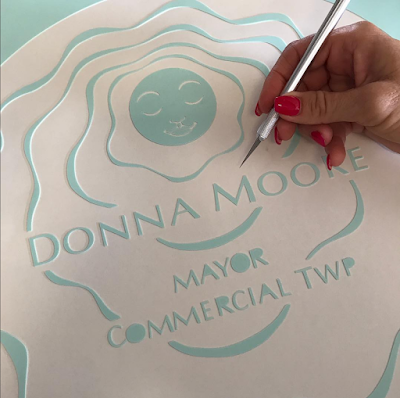 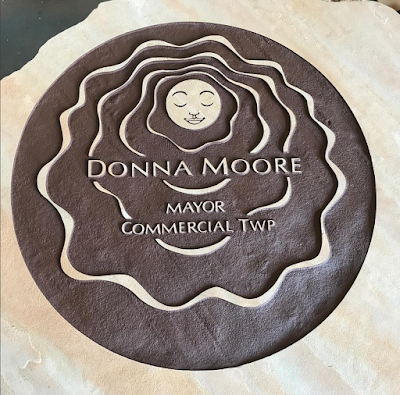 She picked a stone based on discussions we had, and on July 15, what would have been Donna's 55th birthday, Tara delivered the finished piece. "What do you think?" she said.  I could only nod as I was fighting back tears. It was exactly what I wanted.

See lots more of Tara's work at her website, lajollastoneetching.com