Animation people in the UK were in for a rare treat on the first Sunday in June. AMPAS [Academy of Motion Picture Arts and Sciences] arranged a screening of the work print of Richard Williams’ lost masterpiece “The Thief & the Cobbler” followed by a Q & A with the man himself. This event was all the more extraordinary because until AMPAS got in touch with Mr. Williams to tell him they were digitizing and archiving the original director’s cut, he had refused to answer all questions about the film.


The reason for this is complicated, but after 25 years of making the film with his own money, earned from commercials and film titles, it was taken away from the director, Williams by a completion bond company because he couldn’t meet the deadline set by Warner Bros. who had funded the completion of the film. All work was halted with immediate effect with little or no warning and the crew were fired and ordered to leave the building without taking anything they had toiled on, night and day, six days a week for anything from 2 to 4 years.

Mr. Williams and his wife/producer, Mo Sutton disobeyed this order and spirited away the work print, the latest cut of what work had been completed to that day. It was this print that the audience saw on a big screen for the first time in Britain. It was fascinating to see a good print, cut together, comprised of pencil tests, the editor’s chinagraph markings, rough storyboard drawings and glorious fully-realised colour scenes with the original soundtrack drawn from classical music and specially-composed tracks by Mr. Williams’ friends in the Jazz world. 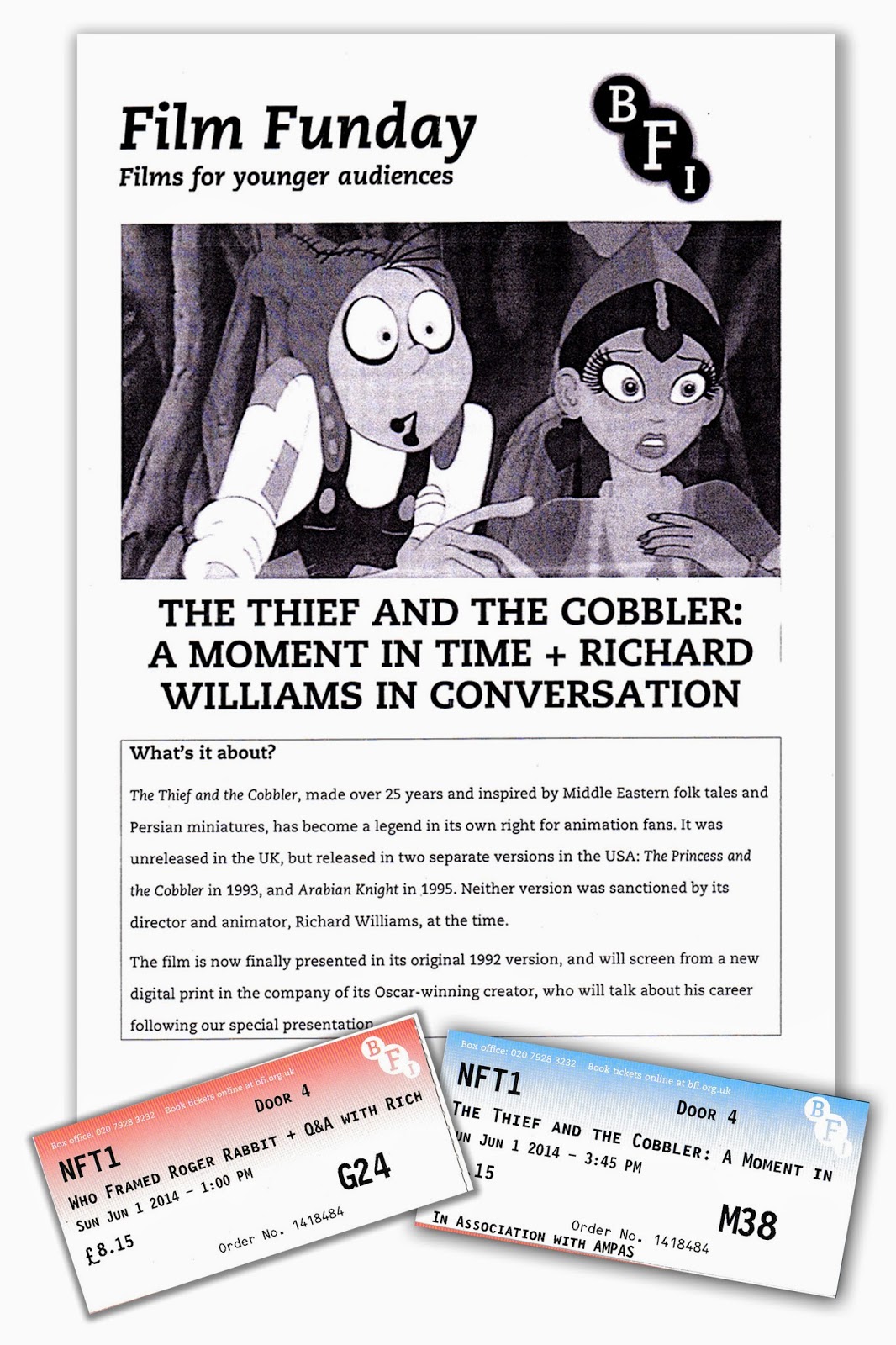 Dick (as the director is known in the animation business) chose to call this screening “A Moment in Time” as this was the last day he worked on “The Thief”. Subsequently, the film was “finished” by various studios around the world, most significant of which was Premier films, a unit set up by principle cameraman John Leatherbarrow, key animator, Neil Boyle and key effects animation designer, John Cousins on “The Thief”. They attempted to maintain the high standards set by Dick. Unhappily, other studios took the budget issued by the completion bond company and rushed out sequences with small regard for quality.

The film was then released with little publicity in Australia and the USA. It was commercially released, then re-released with two different titles “The Princess and The Cobbler” (1993) and “Arabian Knight” (1995), and had been re-cut, re-dubbed, with entire original scenes removed and replaced by mediocre work. The original negative was cut into pieces and effectively destroyed.

In its raw semi-finished state, the viewer can still appreciate in this director’s cut, the huge advance in what is now termed traditional hand-drawn animation. The superior overall design based on flattened perspective , the breath-taking optical illusions, fluid animation and a story which grew ‘organically’ by Richard Williams and his colleagues cannot be compared to mainstream commercial animated films.

It could perhaps be properly termed an epic ‘art’ film. But unlike many so-called art movies, this just happened to be conceived by some highly talented artists collaborating over the course of 30 years or more. It is at this juncture that mention should be made of a few of these highly creative originators. No disrespect is meant by the omission here of the names of literally hundreds of people who worked on the film, all of whom were utterly dedicated to helping Richard Williams to realise his vision.


On this occasion at the BFI, Mr Williams paid tribute to the design work of illustrator, Errol le Cain (who tragically died in his 40s), who produced the original Persian-influenced backgrounds, full of vibrant colour. Then there was the layout work of Roy Naisbitt who designed an entire city which was then animated ‘in-the-round’ by hand. He also came up with checker-board black and white merging into colour backgrounds which are staggering to see on-screen in motion. Shot after shot is brilliant in its sense of design, taste and sheer elegance. Not even the Disney studio in its golden years of “Snow White”,” Pinocchio”, “Fantasia” and “Bambi” created such innovation.

Rostrum cameraman, John Leatherbarrow was charged with the responsibility of getting this work onto film and he came up with exposures and lighting- effects, purely in camera, on film, with no access to computers at that time. The result of Roy’s and John’s technical film savvie is superior to what contemporary CGI films achieve, even today.


Mr Williams then acknowledged the work of the animators – of the many who animated on the film over the years, Dick made special mention of American master animators, Grim Natwick, Art Babbit, Emery Hawkins and Ken Harris. They were old men in their 70s, 80s and 90s by the time Dick cmade contact with them and invited them to fly over to his London studio. But they taught the younger animators, the hard-won craftmanship of their respective lifetime careers in animation. Dick also earned respect and made friends with famed director Chuck Jones and Disney animators, Milt Kahl and Frank Thomas who helped him to become a better animator himself with much morale-boosting encouragement.

Anything Dick learned from these masters of the medium, he would pass on to younger generations of animators, privately and in worldwide lectures. They, in turn, would pass on this received knowledge. Eventually Richard Williams published a book and DVDs called “The Animator’s Survival Kit” written and illustrated by himself and his protégée, Neil Boyle, of the principles of animation – everything he had learned from the masters of the medium. It may end up as Dick’s lasting legacy that he will be remembered by future generations of animators. 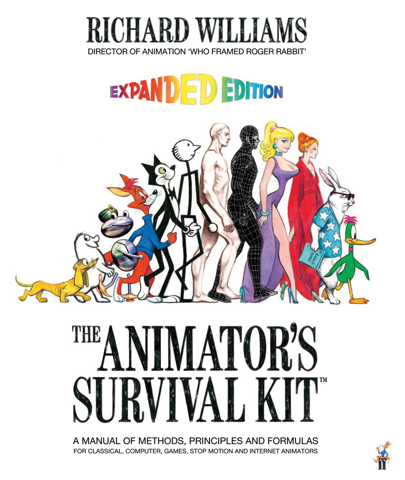 Over the years, aficionados of animation have created a growing groundswell of interest in this ‘lost’ masterpiece. Garrett Gilchrist’s ‘recobbled’ edit faithful to the original director’s cut is now freely available to watch on YouTube in TheThiefArchive. This contains much extra finished material of a high standard, not seen on the officially-sanctioned version. Kevin Schrek has made a documentary on the whole saga of the making of “The Thief” which has been shown at various festivals and screenings around the World.

Although Dick claims not to have seen either of these works and does not want to as “it would bring back too many bad memories”, he did concede that the fact that they have created so much discussion may have led to AMPAS archiving his version. The fact that he can now talk about “The Thief” suggests closure of the whole business on his part.

When Richard Williams was chosen to direct “Who Framed Roger Rabbit” in the 80s by Steven Spielberg and the Disney management, the subsequent worldwide success of that technologically- groundbreaking movie led directly to the funding of “The Thief” by the Hollywood powers-that-be.
At the BFI screening, he said that in retrospect, he should have looked to Europe where he might have received the time, if not the big budget, to make his movie, his way. His way of dealing with the loss of his lifetime’s work was to get back to work on a new personal film, based on a Greek play by Aristophanes. Dick thinks it is the best work he has ever done.


Allowing for hyperbole, one can only marvel at a man who having entered his 80s, has survived major heart surgery and retained a piercing intelligence, huge energy, enthusiasm and ambition and who works as hard as he ever did through the preceding decades.  Genius is an over-used word so I will use the word ‘hero’ to add my personal accolade to Richard Williams, a giant in the history of animation.

(Editor's note: You can see more of Pete Western's animation and story board work at www.peterwestern.com)