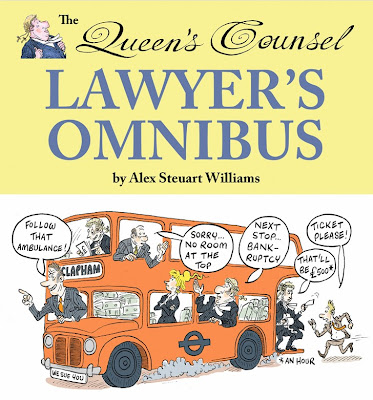 Queen's Counsel started off as a pitch in early 1993. It was begun by me and by my co-author Graham Defries when we were both researchers at the House of Commons. It was originally a strip about politicians, but no-one was that interested, so when we both became lawyers we stuck wigs on the characters and re-submitted it as a law strip.

We sent around a dozen cartoons to Private Eye, the Spectator, and The Times. Private Eye liked it but said no.  Michael Heath, who was cartoon editor at the Spectator (and still is) rang and asked us to come in and see Dominic Lawson, who was the Editor. So we were brought in to see the great man. Lawson liked the strip, but on the way out we asked Michael Heath how much we would be paid. Oh….he said…”we all work for free around here”. No seriously, I asked what would the fee be? We were both students, with no visible means of support. Heath just laughed “Oh, hardly anything….we’re all gentleman scriveners here….you know how it is…”.

That night David Driver, art editor of The Times, rang and said they wanted to run the strip. I said, well, we’ve just been talking to the Spectator. How much did they offer you? - asked David. I said, well, they wouldn’t say. At which point David offered us enough for both of us to pay our rent. So, the next day I rang The Spectator and told Michael Heath that The Times had made us an offer and could they match it? Michael Heath said no, they could not possibly match it, and we should definitely take the offer from The Times. But, he added “you’ll never work here again”.  A few days later I got this letter in the post: 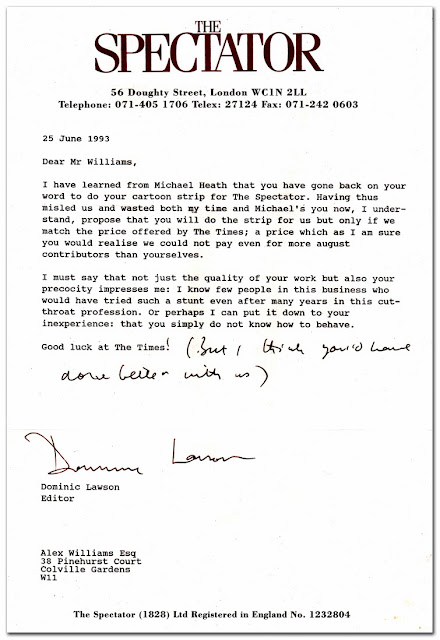 It's been hanging in my downstairs loo ever since.


The best thing about parties is the chance to see lots of old friends whom I never seem manage to catch up with. Among them was the hugely talented photographer Richard Keith Wolff, a fellow alumnus of Warner Bros Feature Animation. He arrived early, took some photos - and did a photo story about the evening. You can see it here.